If you follow the NFL, I’m sure you’ve heard these quotes and their variations many times before. The prevailing notion behind this idea is that as a game goes on, a powerful running back and offensive line exhaust a defense and become more effective. This is one of the cornerstones of a ground and pound style offense, and is repeated week after week by announcers, coaches, players, and fans. Given the popularity of this idea, I thought it would be interesting to see if it actually holds up when looking at RB stats this season. I took five of the most successful and high volume RB from this season and analyzed each of their carries to see whether they are more successful as time goes on. Here is what I found:

Todd Gurley has been one of the most consistent running backs this season, and is even in the conversation for league MVP. His hard hitting running style combined with his top line speed and agility make him one of the most dangerous players at the position. Here is a chart showing his YPC average by carry number this season: 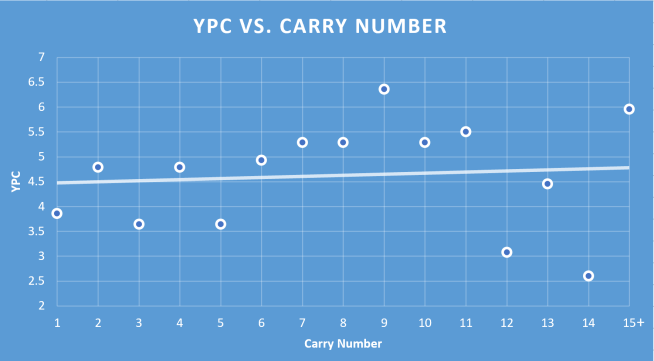 This chart shows a positive linear trendline, suggesting that Gurley is more successful as time goes on. Gurley has been most successful in carries 7-11, which is generally the spot right before the Rams are running out the clock and the defense stacks the box. If you group Gurley’s carries in groups of three, the correlation between carry number and YPC is moderate positive correlation (+.402).

Elliott has been one of the most consistent and most used running backs in the league since he burst onto the NFL scene in 2016. Not afraid of any contact, Elliott has bulldozed his way through NFL defenses and is the backbone of the entire Cowboys offense. Here is a chart showing Elliott’s YPC numbers by carry number this season: 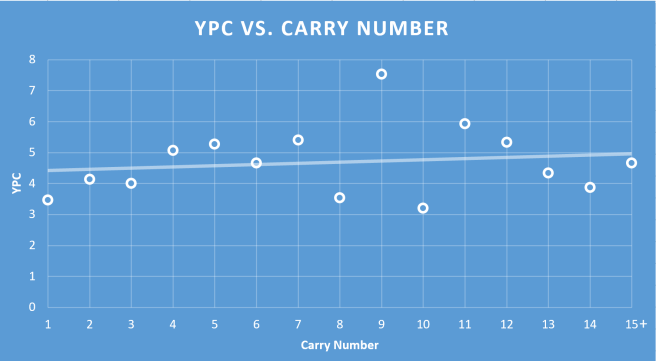 Once again, there is a positive linear relationship between Elliott’s YPC and the carry number. Just like Todd Gurley, Zeke had his highest YPC numbers in the 7-11 carry range, again suggesting that he was most successful before defenses start to stack the box toward the end of games. When you group Elliott’s carries in groups of three, the correlation between carry number and YPC has a low positive correlation (+.116).

Barkley has had one of the most successful rookie RB campaigns in NFL history, and has more than lived up to the hype and 2nd overall pick. He has been extremely successful this season despite running behind an extremely lackluster offensive line, proving he is a force to be reckoned with. Here is a chart showing Saquon’s YPC numbers by carry number this season:

Here, we actually see a very slightly negative linear relationship between Saquon’s YPC and carry number. However, 4 of Barkley’s 5 highest YPC totals were between carries 7 and 11, proving that trend still holds true. This negative relationship could be caused by the Giants having to rely on the passing game late in games, as they have often trailed this season. When you group Barkley’s carries into groups of three, the relationship becomes positive, suggesting the negative relationship is due to outliers in the data. When grouped, Barkley’s YPC and carry number has a low positive correlation (+.044).

Conner has been one of the biggest surprises in the 2018, transitioning from a backup role in Pittsburgh to a full on bell cow in Leveon Bell’s absence. The second year running back is a great between the tackles runner, and is extremely powerful when taking on defenders. Here is a chart showing Conner’s YPC numbers by carry number this season:

Conner’s running stats show a very positive linear trend with YPC as time goes on. Conner remained relatively consistent in YPC through much of his carries, with outliers at carries 1, 4, and 14. When carries are grouped into threes, the correlation between carry number and YPC is a low-to-moderate positive correlation (+.275).

Through much of the season, Gordon has been extremely productive. He hasn’t received nearly as much media attention as the previous four running backs, but has proved that he belongs in the upper echelon of the position this season. Here is a chart showing Gordon’s YPC numbers by carry number this season:

Again, we see a very positive linear relationship in the chart. 3 of Gordon’s top 5 YPC numbers fall within carries 6 and 10, similar to Gurley, Elliott, and Barkley. When Gordon’s carries are grouped into threes, the correlation between carry number and YPC is a moderate positive correlation (+.335).

When all of the carries by groups of three for each RB are averaged together, the correlation between YPC and carry number is +.436, a moderate-to-high positive correlation that cannot be overlooked.

While this analysis does not flat out prove the notion that running backs wear defenses down over time, it provides quantitative data that is pretty convincing and shows that there is a definite correlation between running back success and times carried.

View all posts by Mike Detzel

3 thoughts on ““Wearing Down the Defense”: An Analysis”